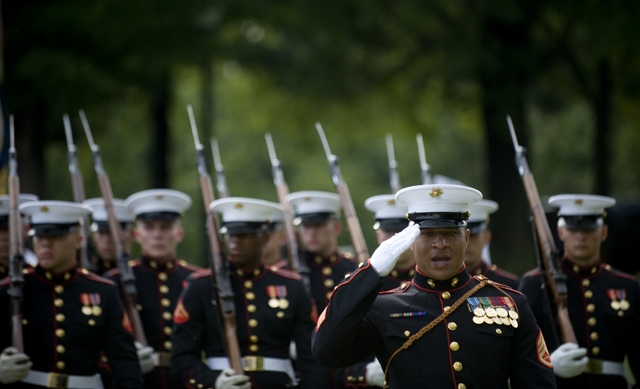 Motivational talks don’t always take place in front of a podium or large audience. Leaders running organizations can drill the process down to morning greetings, staff meetings, company retreats, and especially moments of a company crisis. Excellent communication skills go hand in hand with leadership and opportunities to motivate abound.

In my last blog, I spoke with former NFL athletes to learn more about beating performance anxiety and excelling to elite-level of skill. For this article, I’ve spoken with three incredible former United States Marines who motivated me beyond belief … and they will do the same for you.

Rob served two tours in Iraq and Afghanistan before being injured by an IED in 2010. The injury left him in the challenging position of living as a double amputee (above the knee), but none of this stopped Rob from continuing to lead others to greatness. It pushed him more.

“Exceptional leaders all share the same two qualities that set them apart: humility, and selflessness,” he said. “A leader must always be willing to admit their shortcomings in order to constantly improve themselves. They must also, in all circumstances, place their team’s needs before their own.”

When asked how he would motivate an underperforming team, Rob says, “I would instruct them to utilize selflessness to drive themselves. It is when one is acting selflessly that they will unleash their full potential. I would also show them why it is important to put the team before themselves, and explain to them why they should believe in the mission of the team.”

It’s all about the team for Rob. It’s about a shared mission. It’s bigger than one person, and when it comes to senior leaders ensuring lieutenants are guiding employees expertly he adds, “They must ensure that their vision, and intent for their mission, is clearly understood by all members of the team.”

Clear communication is key. So is leading by example. “A senior leader must set an ideal example of how they expect their lieutenants to lead,” Rob added.

After receiving an honorable discharge from the Marines, Rob went on to compete in the Paralympics and World Rowing Championships. He has completed the insurmountable challenge of running 31 marathons in 31 one days and travels the country to share his strategies for staying motivated, pushing past fear, and living a life filled with purpose.

The blog here at Phenomenal Speeches is usually about public speaking for large audiences, but as stated before, I wanted this post to focus more on leadership communication. For executives who want to master the kind of leadership that pushes employees beyond what they thought they could do, Marine Corp. veteran, Artesian Kirksey says they must understand that leadership is not just about a title.

“I take leadership extremely seriously, and when I am personally looking for a coach, mentor or model, I look for someone with straight A’s,” Artesian says. He describes straight A’s a combination of the right Attitude, Attributes, Aptitude, and Altitude.

A leader who consistently motivates others must have the right Attitude. He or she must have upstanding character, values, and a track record of listening and treating others fairly no matter their rank—this is their Attributes. “Aptitude, to me, is when true leaders take themselves seriously enough that they have coaches and mentors,” Artesian said. “Because I want to make sure the people that I’m learning from—that they’re still learning, and they’re still growing.”

Read. Develop. Grow. Inspire. Motivate. And lead by example. Artesian’s straight A’s calls for Altitude next, which he describes as evidence. “Where is the evidence that supports everything you’re talking about? How many other leaders did you create? How many other people did you help develop? Where is the evidence of that?” That’s what Artesian looks for in leaders and what he feels translates well into civilian life.

Artesian served in Afghanistan during Operation Enduring Iraqi Freedom. He admitted that the Marines cemented a leadership mindset in him and if he had to put motivation into one word, it would be energy. “Motivation is having the right energy to do the right thing at any time. Not just at the right time. At ANY time. People should be motivated by what they have to gain, not out of fear of what they have to lose.”

When asked how he would motivate an underperforming team, Artesian said he would pose the following question, “If we stopped paying you today for your doing your job description, but we kept paying you based on the value you brought, what would you bring to the environment?” He said he would challenge and encourage employees to bring whatever value they feel they could provide outside of their job description, whether it was a positive attitude, a better attendance record, a willingness to help others out.

“People underestimate the power of value,” Artesian says, “When you bring value, you enhance the environment significantly. Another thing I would do is tell them to use their current work environment as practice. I’d tell them I know they aren’t going to be there forever, but while they are there, use the opportunity to practice whatever skillset you need for the next level. If that’s proactive and effective communication, conflict resolution, time management, patience or something else…practice it here. If you use this environment to practice for where you really want to be, everyone wins.”

Too often rank and file employees feel senior management doesn’t understand or truly see them. They feel as though they’re replaceable and therefore don’t always give their all. It is up to leadership to take responsibility for motivating these individuals. Leaders have to get them to feel a part of a team that is working toward a goal that is larger than any one individual. Communicating—both verbally and nonverbally—in the ways mentioned thus far can ensure your employees know that leadership is present and leading by example.

By borrowing some of the ideologies and strategies of one of the United States’ most powerful branch of service, business leaders can retain top talent and keep them from going to competitors. Executives can boost the morale of rising stars in the organization as well as extract potential talent from employees who are new to their organization. Leaders who make a daily effort to motivate their employees do not go unnoticed and are seen as strong and competent.

When it comes to public speaking as most people think of it, Lydia Davey, a former Marine, stresses the importance of only telling people what they need to know. This goes for internal communications with employees and speaking to external groups in general. “If a detail doesn’t add value, I cut it. I’m ruthless in eliminating useless information. Ask yourself ‘Why would my audience care about this?’ It’s basic, but you’d be surprised how often speakers get sidetracked by delivering content in a rigid format that’s completely disconnected from the needs, wishes, and motivations of their audience.”

When she was a Marine, Lydia deployed to Afghanistan in 2006 in support of Operation Enduring Freedom. She also worked extensively throughout Africa, Asia, and Europe for eight years. As a civilian, Lydia is now an entrepreneur, author, and motivational speaker.

“My goal is to have a steady cadence of humor, story, and original insights delivered in a way that meets the needs of the audience I’m speaking with. If I do my job well – they leave motivated, entertained, and informed.”

These incredible tips can help you hone a sharply defined reputation as a leader whose presence alone inspires. Best of all, these traits and perspectives cost nothing to implement.

You can start today.

Just imagine the reaction of your employees if you adjusted your communication style to motivate like a marine (without yelling and getting in their faces :)—to show AND tell, to lead by example…how differently would they act? What would be the benefits to company spirit and productivity?

I post a lot of videos, infographics, PDF resources, podcasts & more. I don't do it all, though---while most of it starts as an idea in my head, the content that makes it to Twitter only gets here with the help of my team. Here they are! https://www.youtube.com/watch?v=P-D0Isi_IWI

It's pride month and we'd like to shout out a few NFT projects doing the work of ensuring representation on the blockchain! Check out @lgbtworldart @DranksyArtist ! 🏳️‍🌈

Download your copy of our latest free report: https://www.web3comms.agency/resources/5-myths-about-nfts-busted/

From our new division @Web3Comms .